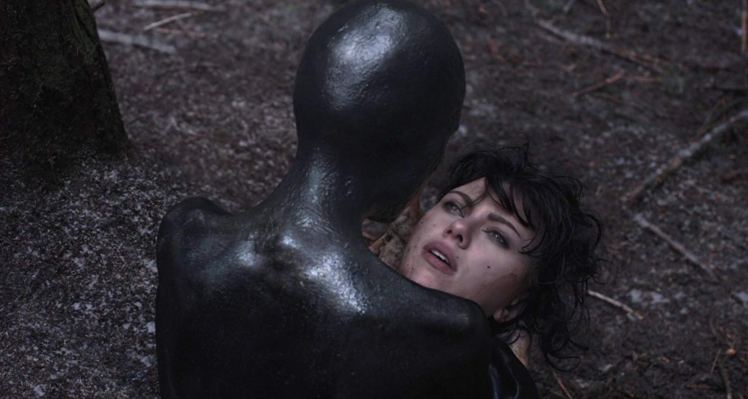 ‘Under The Skin’ is the perfect metaphor for how this film operates. It’s a bizarre picture from the first scene on and instantly generates intrigue, the same intrigue in the film that leads characters into surreal situations. The visuals create the dreary feeling, as well as Scalrett Johansson’s detached performance. It’s raw visual storytelling.

The moment it cuts to the dark backdrop and Mica Levi’s traumatizing and beautiful piece of music play, the moment seizes you. As Johansson’s character does in those moments, I as an audience member became hypnotized, as the gas-like sludge slowly rises. I can’t speak for the whole film reaching this level of visual stimulation, but those moments are some of the most surreal I’ve ever experienced.

Besides the sheer visual nature of the script, Under the Skin relies on small moments of world and character development, but we’re left in the dark on many significant plot points. This beckons back to the director’s decision to rely entirely on atmosphere and feel. Under the Skin is exactly that, an unsettling feeling that last to the very last moments, and the entire point of the story itself.

Set in Scotland, the film follows two quiet and unique characters as they seemingly play a game of cat and mouse throughout the countryside. I entered this film blind, so having no basic understanding of the premise, I got to experience learning about her motives and reasonings blind. It was fantastic and helped the mystery build.

A24 has an amazing sense of new, innovative directors within the horror genre, and while Glazer wasn’t a young man when he made this film, his unseen talents have been fully realized in this film. He absolutely nailed the main attraction behind this film and it’s the adrenaline rush of experiencing, first hand, Johansson’s character. Living through these unsuspecting victims experiences leads to frankly nightmarish situations.

Under the Skin doesn’t always hold up narrative-wise. It’s long stretches of driving. It’s more subtleness of her character and trying to fit into this society that she clearly doesn’t belong in. It’s not wildly entertaining on each frame but does allow for some needed introspection, and setups nicely for the moments that demand the audience’s attention.

Under The Skin is a must-watch, in my book. Despite some of the slower paced moments of the film, for anyone who even remotely enjoys the horror genre, go check out this wholly unique film. It’s got some of the most surreal, adrenaline-laden moments of the last five years. The filmmaking really is one-of-a-kind and that’s through the vision of Glazer, and the execution of Daniel Ladin’s contrast, hazy cinematography.

Go seek out ‘Under The Skin’